Ever since I started reading Chimamanda Ngozi Adichie’s books, I’ve been craving a travel guide to Nigeria. Thankfully, Lape stepped in to share all her best Nigerian travel tips!

Nigeria is the most populous country in West Africa and has over 140 million citizens.  With over 200 ethnic groups speaking the same number of languages, the country is a culturally diverse one.  Although its people speak so many languages, English is the official language in Nigeria.

Not only is the country very different culturally, it varies greatly geographically with beaches and a coastal region in the south and deserts in the north.  Providing a travel guide for such a large and varied country in such a short article is difficult but this guide aims to highlight items that are most notable about Nigeria.

Must Do in Nigeria

Go to a beach

Lagos, the commercial capital of the country, which is located in south-western Nigeria, is known for its beaches.  There are several public and private beaches to choose from in this city so ask around and head for the one you fancy most.  Don’t forget to use sunscreen.  Nigeria is a tropical country.

Nigerians, especially the Yoruba people, love a good party.  The typical Yoruba ‘owambe’ (Yoruba slang for ‘party’) involves a crowd of people, lots of food and drinks and a live band singing traditional and Western music.
The highlight of such parties is the ‘spraying’ which is when people dance and money is placed on their foreheads and bodies by their friends as they all dance.  The person being sprayed mustn’t appear too eager to hold on to the money although they do try to keep an eye on it.  The whole thing is a sight to behold.

Abuja is the capital of Nigeria and is in the northern part of the country.  Wuse Market in Abuja is a good place to buy intricately-designed gold jewelery at reasonable prices.  Wander around the market to check out other items on sale and remember to bargain for what you want. 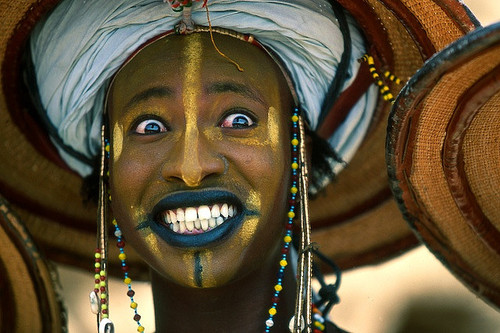 Must Go in Nigeria

Obudu Cattle Ranch is a calm spot in the hills of Cross River state which is in the eastern part of the country.  There is a resort at the ranch from which you can go hiking in the forest trying to spot monkeys and other animals but people generally go to Obudu Cattle Ranch to chill.
There are parts of Obudu Cattle Ranch that are so high up, you feel like you can touch the clouds.  It gives new meaning to the phrase ‘walking on air’. 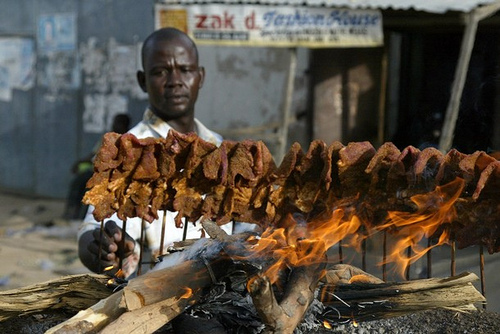 Must Eat in Nigeria

Although originating in Northern Nigeria, suya is a snack now enjoyed throughout the country.  Suya is a type of thinly-sliced, peppery beef kebab usually served with sliced onions and tomatoes and enjoyed with a glass (or two) of cold beer.

This drink seems largely unique to Nigeria as outside the country, bars don’t seem to have heard of it.  Chapman tastes slightly different in different bars and restaurants around the country but it is a staple enjoyed by both adults and children.
Chapman is made by mixing roughly 3 parts Fanta, 1 part Sprite, a little blackcurrant cordial (or Ribena when push comes to shove) and the special ingredient – a few drops of Angostura Bitters.  Pop in a few ice cubes, garnish with slices of lemon and cucumbers and the delightful drink is ready.

Cultural Tips for Traveling in Nigeria

Although English is the official language of Nigeria, you are more likely to come across Pidgin English wherever you go.  Pidgin English is a kind of broken English that is pretty easy to understand  – there really aren’t any rules of tense or concord like there are with proper English. 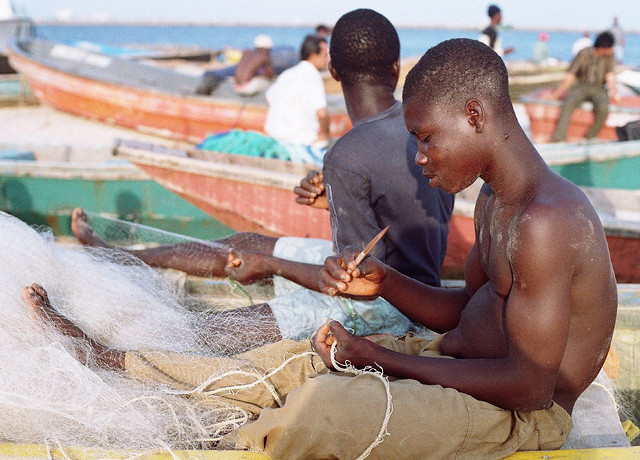 Traveling on the Cheap in Nigeria

Although there are several large hotel chains in Nigeria, it’s probably better and cheaper to stay in smaller, boutique hotels.  You would save money, hotel staff will probably be more attentive and you are more likely to feel like you’re staying with friends than staying in a hotel.
Of course, Airbnb is usually more affordable than any hotel and offers a more “authentic” experience. Here’s an entire apartment for $40 a night! If you’ve never used Airbnb before, here’s a $40 credit towards your first booking.
Any questions for Lape?  Have you been to Nigeria?  Share your links and tips in the comments!
P.S. 7 travel tools I will not shut up about till you try them

Amazing! Nigeria isn't even a place I had considered going to until now. It looks awesome!

@Rachael: Nigeria is a pretty happenin' place. Pleased you think so.
@Nova: Glad you think it looks awesome. I hope you'll visit soon 🙂

Wow, I would have never thought of exploring Lagos and Abuja. I work for an airline and we are not allowed to leave our hotel and have a police escort when we travel to and from the airport.